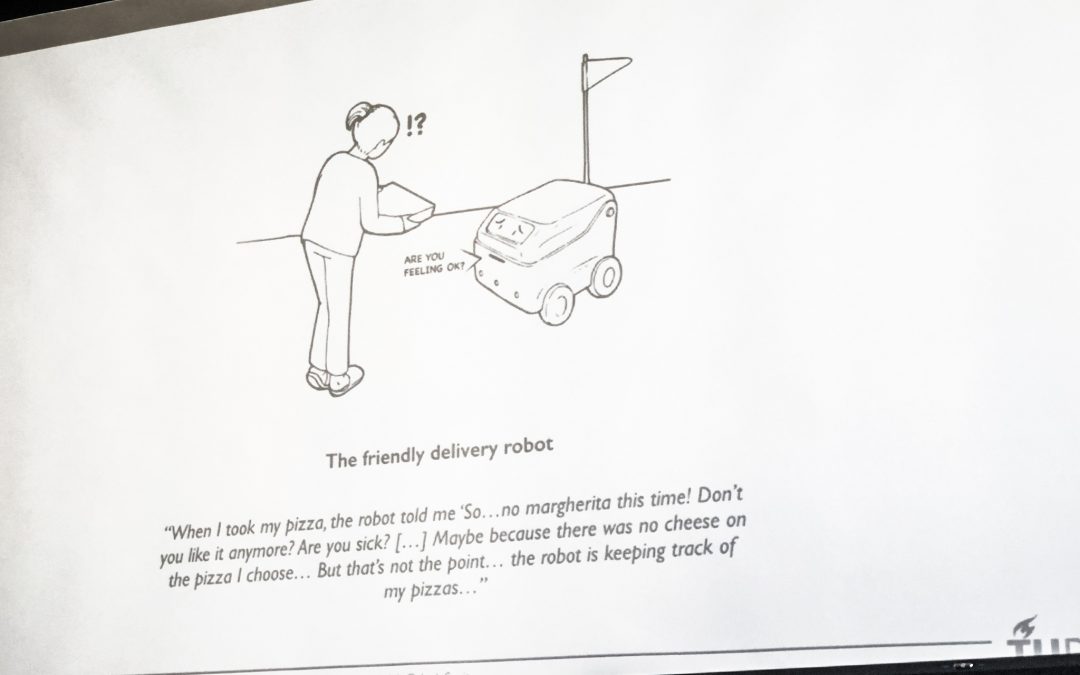 On October the 3rd, Maria Luce Lupetti was invited to give a talk about her research project which was conducted together with Nazli Cila, and Iskander Smit at The 10th NordiCHI in Oslo, Norway. The smart city infrastructure will soon start to include smart agents, i.e., agentic things, which co-exist and co-perform with human citizens. This near-future scenario explores the flexible types of collaborations and relationships between the human and nonhuman citizens. Drawing on current technology forecasts and AI/robotics literature, we created five fictional concepts for reflecting on themes we deem important for such collaborations: responsibility, delegation, relationship, priority, and adaptation. The promises, challenges and threats of these themes are discussed in this paper, together with the new questions that were opened up through the use of design fiction as a method.Link to ACM digital library or website:

Reporting on workshops Things as Citizens

At the website of info.nl LABS a short report was published on the workshops we did with PACT at The Next Web and Border Sessions. “Things as Citizens”, by Louise Hugen is the first graduation thesis developed as part of PACT project. The project explored the possibilities of Things to be as citizens by means of a literature study, several creative sessions and a user test with a prototype of a Thing as citizen. The following article, authored by Louise Hugen, illustrates some highlights of the master thesis.

The aim of the thesis is to identify design qualities for intelligent things to perform appropriately during shared practices with citizens according to the urban culture in the city. The urban culture refers to the way that people behave in the city environment regarding the concept of citizenship and public behaviour.

In this context, things are connected artefacts that are able to connect to humans and non-humans via internet with data technologies. Therefore, things have a special proactive influence on humans as compared to other artefacts. It means that things become part of the city as active members. Therefore the project focuses on things as citizens by exploring the requirements for the coexistence of things and human citizens. The focus is on the notion of co-performance in the smart city: a concept that regards the practices of humans and things with agency to be equally important during shared practices.

The research questions of the project are as follows:

A literature review on things and the notion of co-performance as well as practice based research with Dutch citizens are conducted: a creative session, contextmapping session and workshop at the yearly event Thingscon, an Internet of Things related conference. The studies showed that a democratic dialogue between citizens and things is needed in order to establish co-performance between both. It means that the behaviour of things should be adapted to the democratic values of society.

The design qualities that fit the vision of a democratic dialogue are identified by combining both the literature review and the outcomes of the practice based research into a synthesis. All design qualities are based on values for democratic citizenship: the right of truth, equality, privacy, participation and granted authority. The result is the design qualities model as can be seen in the following figure.

In order to evaluate and validate the design qualities, a concept of things in the city is developed that serves as a demonstrator for the theme Things as Citizens. The concept is designed in the context for air pollution and is a provider and distributor of clean air.

On April 6th 2018, PACT conducted an ideation workshop on autonomous bike for future smart cities, as part of a master project in collaboration with the Amsterdam University of Applied Sciences. More details about the workshop results can be found here.

Cities are becoming smarter. Sensors are embedded on objects such as traffic lights or park benches; the data generated by the user of the city are combined and analyzed to optimize the use of the city in all kind of ways, offering new products and services.

Project PACT argues that there will be a next iteration of the smart city as soon as the things become more intelligent through artificial intelligence and machine learning. Things will become self-aware and have agency. The things will be citizens too in the intelligent city. Not only will we see new interfaces with services as the dialogues become more dominant paradigm, the whole system of the things in the city will change. When we understand the potential relation between people and intelligent things, we are better able to live with them. Designers will have an important role in shaping this future society.

For designers this triggers all kind of questions. What is the rule set we need to design for these things? And what is the relation between things and humans in these smart cities? In this project, we would like to dive deep into the future of these new cities and make a demonstrator of one particular thing, a bike that behaves as a citizen.

Processed with VSCO with a6 preset

Imagine a bike that is riding itself based on a target that is given. The bike is intelligent and takes the best route. The intelligence is so far developed that the bike can react on its user and direct context, and combine this with the knowledge of all other members of traffic.  At the same time, the cyclist should be informed on the (expected) behavior of the bicycle to deliver a comfortable ride. This is of course a hypothetical product, but it could happen. We would like to get insights in the possible interfaces. To keep it focused, we frame the context towards an area of 50 x 50 x 5 meter on the crossing Wibautstraat/Mauritskade.

The embodiment of intelligence in the bike leads to its own will and actions. Within that space, every solution is possible to achieve an interaction between bike and rider. Steer, pedals, bike, saddle, or whatever you can think of can become touchpoints for interaction, and visual, touch or audio or anything else can be used as cues for interaction. Next to the interface, we also think it is interesting to design the relation between the thing and the human, i.e., who is in charge/when and what is the communication style.

PACT research program, together with AMS (Amsterdam Institute for Advanced Metropolitan Solutions), is launching the project “Things as Citizens” with a kick-off event on April 17th.

The project is dedicated to the investigation of the opportunities and challenges of emerging interactions between people and autonomous things, in the context of smart cities. The aim is to explore how things might connect with existing networks of data, collect real time data, act proactively and behave socially.

The event aims to bring together experts in the fields of data science, robotics, ethics of technology and social sciences to discuss what are the main challenges and opportunities currently offered by the smart city infrastructures, and how these should inform the design of near future things as citizens.

Program of the event:

Register to the event: